While I was searching my old storage mediums for possible Star Wars fan film content I've also been able to find some very rough sketches of what I was aiming at with the new species called the Garron-Hinn, who were going to be one of the main villainous groups later on in my stories. There's also a very, very bad attempt at a watercolour painting of the Garron-Hinn home world that I did in 2014 when I had my little art spurge. I rightly thought back then that it was not good enough to upload here, and I still think that way now. But I guess I don't care any more.

A concept idea of the Garron-Hinn

I recently watched a Youtube tutorial by Ekaterina Smirnova about painting the Blue Ridge Mountains, and as it looked like a good one for a noob I thought I'd give it a go.
Rather than paint along to the tutorial, I decided to try it later in the day from memory, which was pretty fun to do. Definitely made a few errors mixing the paint and didn't get the transitions right, but oh well.
After that I downloaded a program called PaintTool Sai that looks like good software for line work and inking, but I found it has a mode called watercolour, so I tried the picture again using that. Certainly looks better as it was easier to get the colours right, but I didn't get the sky right at all.
And I definitely need more practise drawing tree branches...

This is my first attempt at watercolour, following a tutorial by artist Frank Clarke. I'm using this as an indication of my starting skill level for watercolour artworks: 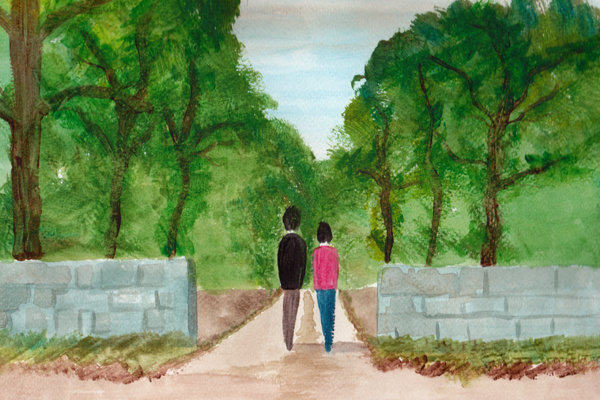 Path in a forest