We've played some more games of 40K recently. The first one was a 1500pt game, and like before we just played a pitched battle without any special scenario or objectives, but we added back in relics, stratagems and warlord traits.
I wanted to see more combat, so I went with all the combat my Marines have, as well as adding more terrain to the table. Shooting still very much ruled the game, even if we both rolled much worse than our previous game. On one turn we got some good combat where my jump pack Marines crunched into some of Scoob's Boyz, but my other Assault Marines got mowed down after their Land Raider got destroyed.
Scoob withdrew after 4 turns, with a Shokk Attack Gun, some Boyz and some Gretchin left to face my scattered heavy weapons, my Captain and a single Terminator. 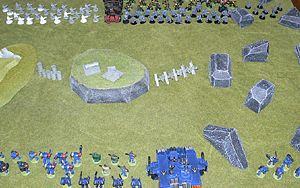 The first battle kicks off 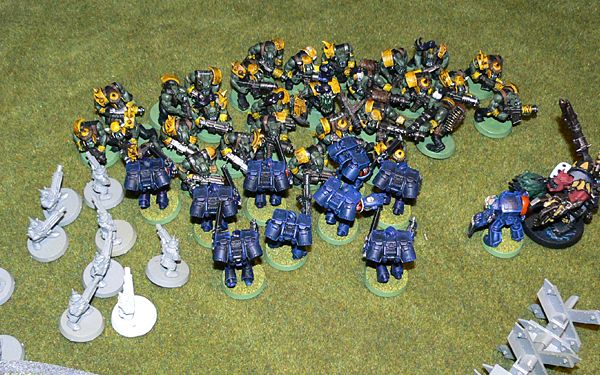 Marines and Orks clash in a rare melee 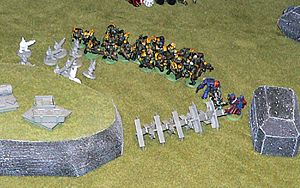 There were few survivors

A few weeks later we lined up again, playing the same type of game but stepping up the points to 2000. The first couple of turns went well for my Marines, but the Orks pulled it back as they got into closer range. The Vindicator exploding on turn 3 took out a bunch of Marines nearby. Neither army had much left after 4 turns, but again Scoob decided to call it, as his Morkanaut, last Mek Gun and last Killa Kan all only had one wound left. I was ready to call it a draw, but he realised at the end he had been slightly cheating, allowing the Morkanaut to fire twice with a stratagem only meant for infantry, so he allowed me the win. 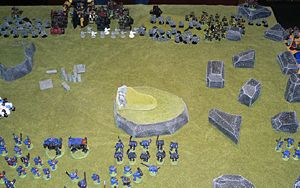 That's a lot of Orks 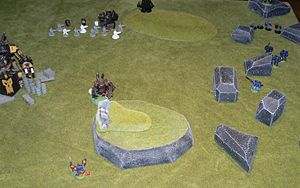 And today we played another 2000pt game. This time we added in 5 objectives, and were going to play to a victory point target, with the objectives each having a victory point score of 200. However, after just the 2nd Ork turn, so many of my Marines were destroyed that I decided to call it. I had some stuff left on the table to have a good pop at Scoob's infantry, but had literally nothing left to take on his completely undamaged vehicles. Scoob said afterwards that he's noticed whoever is getting the first turn is winning, which in my opinion has always been the problem with 40K. In 8th edition it seems even worse, as with all the re-rolls, auras, stratagems and the like, if you have a good turn, it's possible to kick out so much damage that the game can be over straight away.
It's just not really striking me yet as a game I really feel motivated to keep playing.

The battle 3 line up 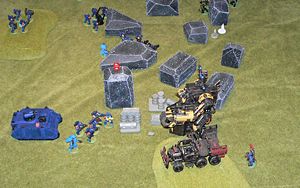 The Orks make short work of the Marines

Scoob and I managed to squeeze in a game of 40K earlier today, which was actually our first one all year. In order to just try and remember how to play, we picked 1000pts and went at it in a pitched battle, using no warlord traits, stratagems or relics.

The battle became bloody very quickly, with both of us rolling very well for our random amounts of shots. My Devastators and Whirlwind, and Scoob's Mek Gunz and Shokk Attack Guns, all rolled massive numbers and shredded their enemies with long range fire. Despite loads of Orks stomping forward to meet the Assault Marines and Terminators, there was very little close combat. We definitely need some more terrain for fighting battles over at Scoob's or this might be the case in nearly every battle.

After three rounds, Scoob had two Shokk Attack Guns and 21 other Orks left to take on my Whirlwind, Devastator squad, Primaris Lieutenant and Apothecary. He decided to call it there, as the Shokk Attack Guns were now targetable by my missiles. 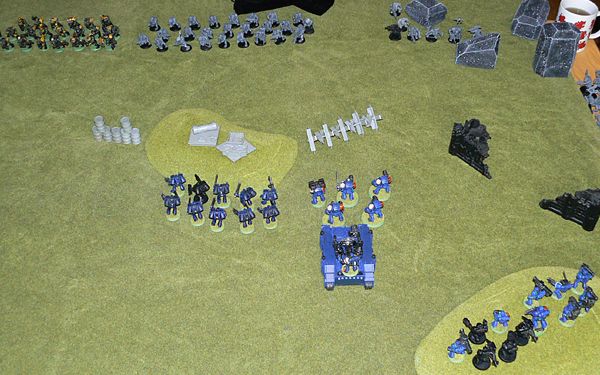 Marines and Orks square off against each other

Not long back, Scoob and I tried a couple of different little "test" 40K games, playing out the same scenario as our 2011 Winter Wave. The point of these games was to test out how the Stompas work in the new edition, as we had heard that they are very weak.
These games saw my Marines and Scoob's Orks (with a looted Shadowsword) defend against the Stompas. In game one, the Stompas took a crap kicking, and did very little in return. Two of them were destroyed, and the third badly damaged. In the second game however, they did a lot of damage in their first turn, blowing up my Vindicator and the Shadowsword straight away, ridding us of a lot of our vehicle killing power, though still leaving them a lot to do.

It was hard to tell from just a couple of short games, but they definitely seemed a little weak. We ended up writing a new data sheet that we will try out in our future games, and I just hope I've not shot myself in the foot by giving Scoob's Orks too big of a boost. 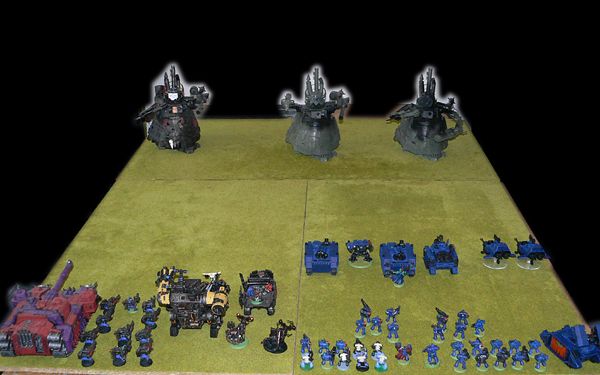 The Stompas ready to attack 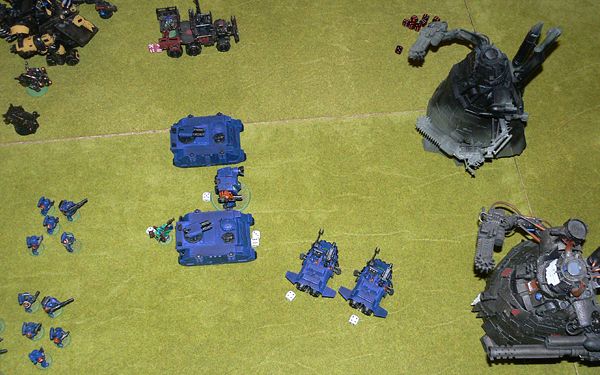 The Stompas close in on my Marines

We have managed another 40K game, which took place this past weekend. Stepping it up to 1000pts, Scoob was able to use his Orks for the first time this edition after their new Codex came out.
It did not go well for me from the start, with the first attack of the game killing 8 of my 9 man Devastator squad, leaving me with drastically reduced firepower with which to try and thin the advancing Ork horde. I also rolled pathetically, and my poor Marines fell left and right to overwhelming Ork firepower. Even though I'd taken flamers and storm bolters, I barely killed anything, and after Scoob's 3rd turn, I only had 4 Terminators left on the board, and we called it there.

I remember back in 5th Marines had trouble dealing with lots of cheap troops, but now horde armies seem to be so prevalent in 8th edition, it's no wonder that Marines seem to be struggling a lot. I need my other armies ready for the tabletop, and pretty damn sharpish it seems. 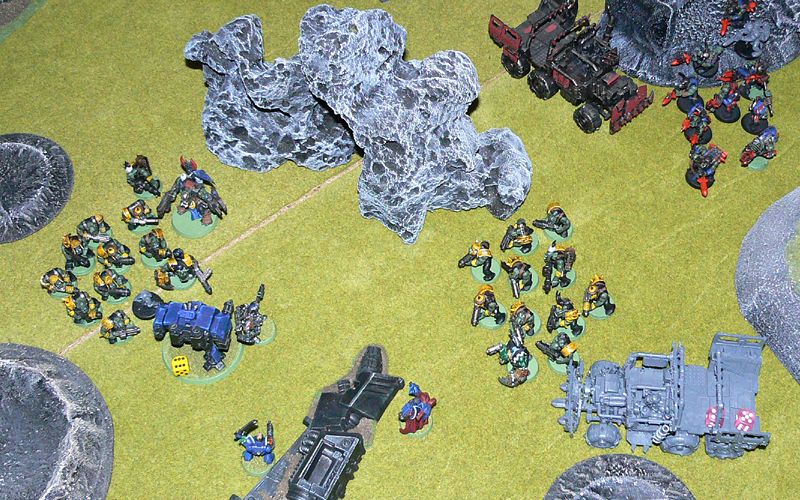 Orks swarm all over the surviving Space Marines

We played another 40K game recently, which was pretty much the same setup as before, being 750pts of Salamanders against Night Lords. In this one, we rolled The Scouring and Scoob picked the vanguard strike deployment. We used some Ork Nobz that Scoob had just given me as the objective markers, and then proceeded to completely ignore them all until turn 5 when my last couple of Sternguard Veterans advanced onto the one in Scoob's deployment zone. That got me 2 victory points, as well as 1 for linebreaker, to go with the first blood point I got earlier in the game. Scoob got linebreaker too as his mob of Chaos characters advanced on my Whirlwind after chewing through my Vindicator and Techmarine. The game ended, luckily for me, after 5 turns. Had it gone on any longer Scoob's forces were poised to take the superior objective which would have got him 4 more points. As it was, I managed my first 8th edition win 4-1.

The armies deploy across the battlefield 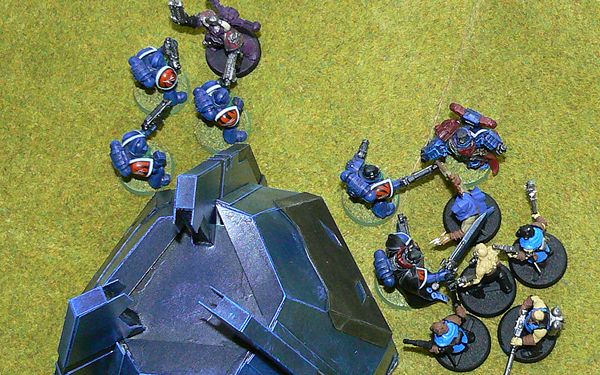 Master Linus and the Sternguard are attacked as they deploy 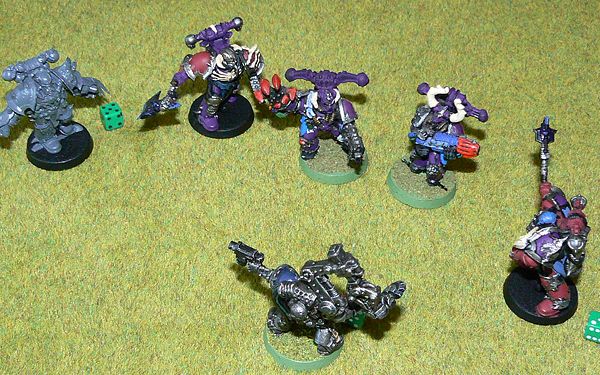 Things do not look good for the Techmarine

Then we get to the meat of this update, which is that we've played our first two games of 40K 8th edition. Both games have been 750pts, with me as Salamanders against Scoob as Chaos Marines, firstly as the World Eaters, then as the Night Lords.

In the first game, we did not play a proper mission, and just decided to play a very basic game to pick up the rules. I was able to eliminate most of Scoob's infantry, but I had brought little to deal with his Vindicator and Helbrute so conceded when I realised the game was lost.
Then yesterday we played the second game, which saw us playing a No Mercy mission. This time, I mistakenly brought too many anti-tank guns, while Scoob had brought an almost entirely infantry army. Even with all the meltas and lascannons, my shooting failed to pop his rhino which was carrying all of his Khorne berserkers. I managed to take it out in combat with a psychic-buffed sergeant, but this brought the end to only one of the Chaos Marines inside.
Now they were free, his berserkers and characters tore through my Marines with glee, and he tabled me on turn 5.

So our first attempts at 8th edition have continued exactly where we left off back in 5th, with me losing pretty much every game against Scoob.

So far, we are a little unsure of these new rules. They are massively simplified compared to previous editions, but at the same time there's way more to remember, like all the auras and re-rolls, and strategic objectives, and stratagems, and relics, and warlord traits. Sigh. We just want an easy, fun game to play.
And also, because the rules are so simple, in just our two games, we've already come across several situations that the rules either don't make clear, or don't cover at all. We're really going to have to start writing a whole bunch of house rules to clear these things up.

The Chaos forces close in 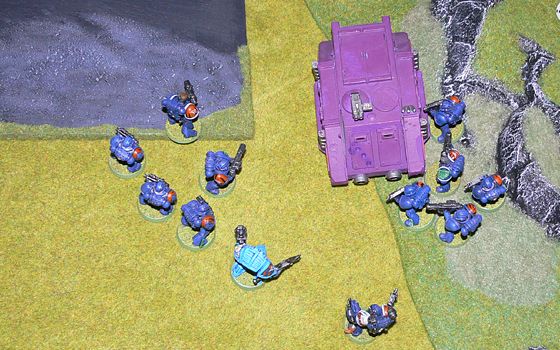 The Marines desperately try to break the rhino