Today we got done with the Dying Light expansion, which is called The Following. We didn't really like this as much as the base game, and so after a while just focused the main story and completely ignored the side missions.

We both felt like it was mostly ruined by the massive map and wide open spaces, all just too different from the city setting of the base game, and we hated having no buildings to jump around on. The map was so large that it required the use of buggies to get around.

Now, we enjoyed some of our time in the buggies, especially when we found a horde of zombies in a field and just plowed them all down.
But relocating from one part of the map to another in the buggy was a pain in the ass, as the game insists on spawning exploding zombies right in front of you, the noise of which then instantly lures hordes of aggressive viral zombies to your position. Just made no sense how they could get to you so fast when you're driving high speed down a road.
And the game constantly forced you to go all over the place to do its missions. It was a ball ache.

Like the base game, the story and characters were kind-of pointless. It has you tracking down a potential cure for the zombie virus, only to throw some weird shit at you like a cult, prophecies and weird revelations at the end that leave you with a choice to make. Like the base game, it does not allow you to play the final mission co-op, so Scoob and I were able to take opposite paths and see how the two different choices play out.
I gotta say, they were both pretty shit, and the story ends (with either choice) making you feel like playing the whole thing was a waste of time. It's just a good thing that the story for this game is really not its selling point.

The fight against Holler was the longest in the game

I run over a zombie

Scoob runs over a zombie

A rumble against four volatiles

And so our adventures in the city of Harran came to an end today when we polished off Dying Light. Like the vast majority of games these days, this one had some things that really annoyed us, but overall it was really fun to play.
Several times during the playthrough, it made us think back to the good times we had playing Saints Row The Third, during which we also spent a lot of time just running around and getting into fights, only stopping to do the quests every now and then.

The things we didn't like included any mission where we had to climb up a tower, any mission where our equipment would be taken from us and returned to our stash (the game's inventory system is hot garbage), the shitty characters and story, and all the idiotic bugs.
And who doesn't enjoy the finale of a game when the end boss fight is just a series of button presses in a QTE style event. I mean, we had machine guns, shotguns, grenades, massive swords and axes, and instead we engage in a knife fight against a one-armed man and nearly lose. Sheesh.
Well, I guess a shit end fight quite suited how shit the villain was.

All the strengths here came from just running around the city and killing zombies and the human bandits, which was so much fun. In fact, it looks like we're going to go straight into the expansion, and get through that as well, as thankfully, the new GPU and PSU seem to have fixed my old computer.
To that end, I've got Diablo 2 installed on it again, just to see if it was the card that was making that game crash as well, or whether there is another underlying problem.

Scoob duels with a volatile

Who does this dude think he is?

Hey I can spit on your head from up here

QTE end boss fight. Just what we wanted. Not.

Our adventures through Dying Light are also continuing, but a few things are hampering us.

I've run memory checkers on the RAM and VRAM, and even fully re-installed the machine, but with no luck. I'm pretty sure it's something hardware related, so I've ordered a new graphics card and PSU, and am just waiting for them to get here. If that doesn't get rid of the problem then the machine will probably be going to the big LAN party in the sky.

When the computer works we've been having quite a lot of fun in the game. After a few weeks of just dicking around looting and killing zombies, we're now really pushing forward to try and finish it, and have just reached the other map called Old Town.

Though it's fun running around and playing the meat of the game, the story is definitely weak, and I couldn't care less for the characters at all.
We're also getting a bit cheesed off by how the behaviour of the zombies is changing as we are going through the game. At first, the regular zombies were very slow and dumb, but now they come charging at us in huge mobs as soon as they see us. This is in addition to all the new types of enemies that keep getting added to the game. It's still not hard or anything, but it's the lack of consistency that doesn't make sense. It's like the game is trying to artificially ramp up the difficulty.
Really, the behaviour of the regular zombies shouldn't change from one moment to the next, surely? 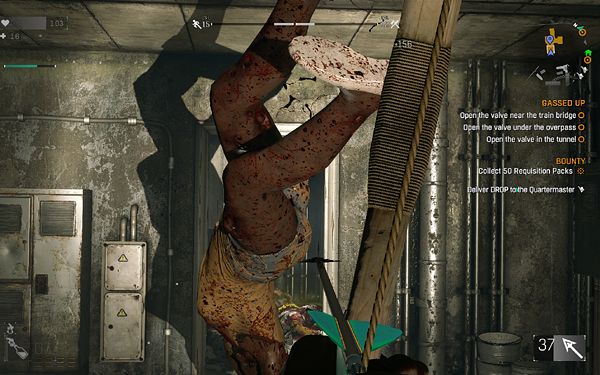 Arrow hits so hard the zombie flies back

Covering Scoob as he makes for an air drop

Putting a lot of arrows into a big dude

Scoob puts the boot in

After the Diablo 2 disappointment, we have instead been dipping our toes into a much more modern game that I bought from GOG a short while back. This game is all about surviving in a city after a zombie outbreak, and it's called Dying Light.

Though it's early days yet I'm really liking it so far. We're just a few percent into the story, but to be honest we've spent most of our time just running around, looting, and beating the snot out of zombies. The mission we did last weekend unlocked the interesting day-night cycle of the game, as during the night, much more powerful zombies come out to play who are seemingly impossible to stop with our starting weapons and equipment.

There's no doubt we'll be spending a good few weekends more on this little beast.

Drop kicks in this game are lit

Nearly kicking Scoob in the face

How'd he get up there?

This zombie has a metal rod up her arse

Looting in this game seems more like fondling to me

Alms for the poor?

They're queuing up to take on the mighty Scoob

Scoob about to get twonked